Can Montreal regain its dignity after all these scandals and investigations? Denis Coderre

The failure of laissez-faire capitalism. With Paul Craig Roberts and Denis Coderre, mayoral candidate of Montreal


http://www.radio-shalom.ca/site/emissions-1042
Topic;
Can Montreal regain its dignity after all these scandals and investigations? With Montreal Mayoral Candidate Mr Denis Coderre

Introduction
For longer than he can remember, Michael Hershman has visited Montreal for business  he said  “I love Montreal, and always will,” he says of the charmingly askew city. For Hershman, co-founder of the corporate-and-political-corruption monitoring body Transparency International, the case is clear: Quebec’s business and political culture is by far the most corrupt in Canada. “Are the problems in Quebec more severe than the rest of Canada?
His  impression is yes,”Montreal is now on its third mayor in seven months; the last one, interim mayor Michael Applebaum, was recently arrested and charged with 14 fraud-related counts. Alexandre Duplessis, the interim mayor of Laval, resigned last week after a bizarre episode in which he claimed two escorts attempted to extort him following a jaunty night at his country home. the Quebec government recently placed the province’s third-largest city under trusteeship, after revelations that all but one of its city councillors were making illegal donations to their party.

Today live from our business Headquarters in Montreal on the Money and Business show is former liberal MP and Montreal mayoralty candidate Denis Coderre to talk about his vision of Montreal and as he said at the start of the race "Montreal needs a conductor, Montreal needs a bridge-builder. Montreal needs a catalyst so we can believe in that city again," 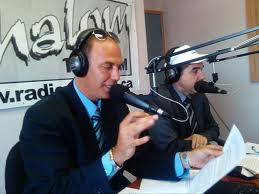 My name is Samuel Ezerzer, your host to the Money & Business show on Radio Shalom, CJRS 1650 AM. Thank you for tuning in live on the Money & Business show, with our Business studios headquarters in Montreal, the financial capital and the home to the greatest hockey team, the Montreal Canadians. We have another great show for you today and as always, you can call if you have any questions, comments, or criticisms on today's topic. Please call us direct at 514 738 4100 ext 200 or email me atmoneyandbusinessshow@gmail.com if you have any inquiries. You can also visit our website athttp://www.radio-shalom.ca/ – all our shows are archived there.

Samuel ezerzer and Denis coderre , business headquarters
Denis Coderre , former MP is a Canadian politician from Quebec, Canada. Denis Coderre was the Liberal Member of Parliament for the Montreal riding of Bourassa from 1997 to 2013.Denis Coderre, entered cabinet in August 1999 when he was appointed Secretary of State for Amateur Sport. In January 2002, he was appointed Immigration minister.

On December 12, 2003, Prime Minister Paul Martin advised Governor General Adrienne Clarkson to appoint Coderre to the Cabinet asPresident of the Queen's Privy Council for Canada where he was responsible for a number of files, such as the creation of the new Public Service Human Resources Management Agency. He was also the Federal Interlocutor for Metis and Non-Status Indians, the Minister responsible for La Francophonie and the Minister responsible for the Office of Indian Residential Schools Resolution. Coderre was not re-appointed to Cabinet following the 2004 general election, in which he was re-elected in his riding.

As Minister of Immigration, Coderre supervised the application of the Immigration and Refugee Protection Act, which came into effect on June 28, 2002. As Secretary of State for Amateur Sport, Coderre successfully negotiated a number of national and international agreements and helped to establish the World Anti-Doping Agency in Montreal.He is currently running for Mayor of Montreal in the 2013 municipal election, as leader of the new Équipe Denis Coderre slate of candidates.

http://samuelezerzer-finance-investments.blogspot.ca/
Program Name: Money and Business with Samuel Ezerzer
Hours : Wednesday live at 4pm, rebroadcasted Sunday at 3am and Monday at 7pm.Description: The Money & Business Show is the only pure Business show, live in-studio direct from Montreal. The show focuses primarily on the Canadian, United States, and the international economy through a Canadian lens. The show is informative, exciting, and sometimes controversial, encouraging healthy debate.